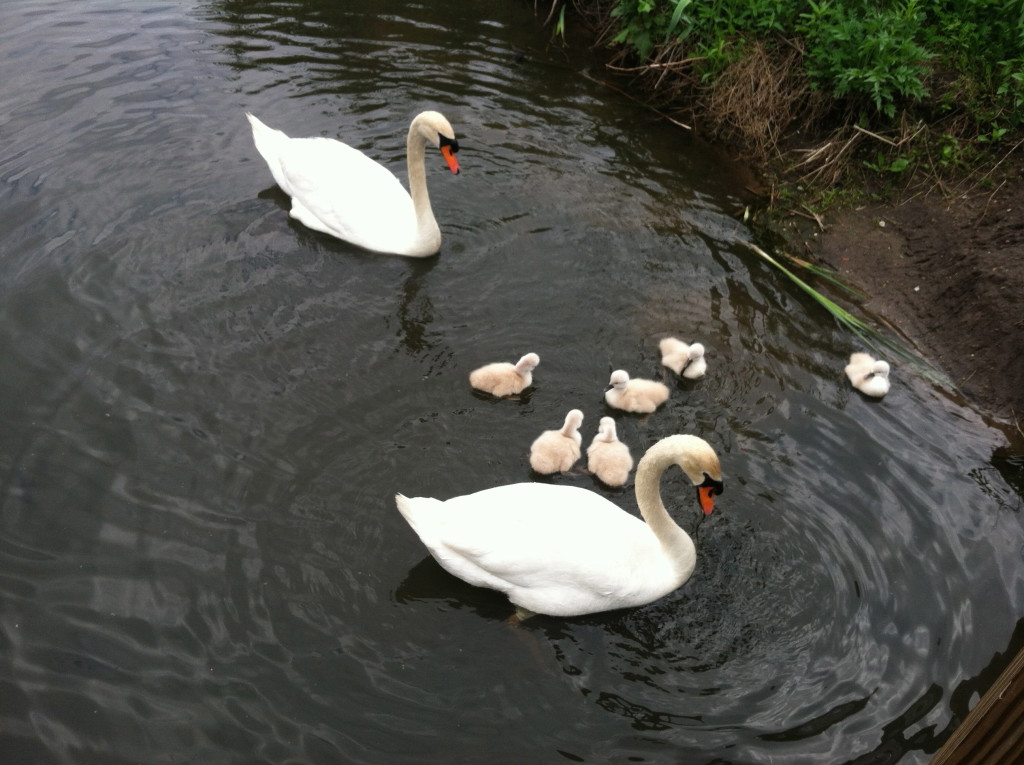 Where were the swans this year?

I just returned from my seventh International Medieval Congress in Kalamazoo, MI. As always, I had a great time, emerging both exhausted from the whirlwind of activity and socializing, and exhilarated from the stimulating and provocative discussions. This Kalamazoo felt different, however, and not only because it was my first time attending as a full-time professor, with the support that entails; and I write this now in an attempt to untangle the threads of that difference, which seem both personal and general.

First, instead of making the usual trek from Buffalo — which had always been a sort of celebration at the end of spring semester, arriving to family and friends in Detroit with perhaps a few papers to grade and my own presentation to put the finishing touches on — I flew all the way from Kuwait. This had seemed like a good idea way back in the fall. I could, as always, rent a car and visit my sister and friends in the Detroit area, drive to the conference, and make a sort of vacation out of the trip. However, in reality, the trip proved a logistical challenge, if not a nightmare: with AUK’s semester not yet finished, my time was even more curtailed than usual. I stepped onto the plane in Kuwait with a raft of essay drafts to respond to, as well as a senior thesis to shepherd through the late stages — not to mention a nasty head cold.

In truth, it was a bad time to be away, and most surprisingly, I didn’t want to be away. I had grown to love my Poetry and Poetics students, and I felt keenly the loss of two of the last three class dates before semester’s end. I had also been working closely with my senior thesis student, the two of us intensely discussing Dante’s encounter with Muhammed in the Inferno, on which she would be presenting her research at semester’s end. Leaving now, with the presentation just a couple weeks away, felt like a sort of abandonment, though I promised to be responsive via email if she needed any help. Being sick made everything that much worse, as I downed cold medicine to get me through the days and largely avoided the usual rounds of open bars and late-night reveling in an effort to preserve my strength.

Even upon arrival, things felt different. As I made the familiar drive off I-94, through Kalamazoo to the WMU campus and thence to registration, I was immediately struck by the incongruous new modernist dining hall being grafted onto the boxlike structure of Valley I, while the pond, always a nice place to relax and reflect between sessions, had been fenced in, the familiar family of swans banished. And it was cold. The weather is always a surprise in Michigan; I’d grown up there, of course, and over the years at Kalamazoo I’ve experienced rainy weather, chilly weather, sweltering weather — this year it was frost and snow. Thus, combined with my cold, my usual morning runs through downtown and campus were replaced by attempts to sleep in, followed by hustling to the warmth of my rental car and morning panels.

The panels I attended were varied and wonderful — none of the papers I heard were half-baked, and many were dazzlingly complete and provocative, even at less formal roundtable sessions. These included a session on “Animal Languages” with great stuff from Robert Stanton on “Old English Animal Voice Catalogs” and Michael Warren on bird sounds in Chaucer’s Parliament of Fowls; Jeffrey Jerome Cohen‘s MEMSI session on “Play”; Gabrielle MW Bychowski and others on “Hermaphrodites in the Middle Ages”; and the mindblowingly entertaining “Dead Language Karaoke” with examples from Old English, Latin, Arabic, Icelandic, Middle English, and Middle Scots. Then there were the sessions I’d helped organize — eth press‘s panel on Jack Spicer‘s The Holy Grail, in which we listened to recordings of Spicer reading the poem interspersed with a discussion from the perspective of several medievalist-Arthurian scholars; and, with Will Rhodes, a roundtable on pastoral verse titled “Against Progress,” in which I spoke about the pastoral elements of Virgil’s Aeneid while others discussed the poetry of Edmund Spenser and Samuel Daniel. Though this latter was scheduled for the dreaded 10.30am Sunday morning slot, and thus sparsely attended, the audience asked excellent questions and we had a wonderful discussion about the complexities of pastoral poetry, a seemingly appropriate end to this Kalamazoo with snow swirling outside. 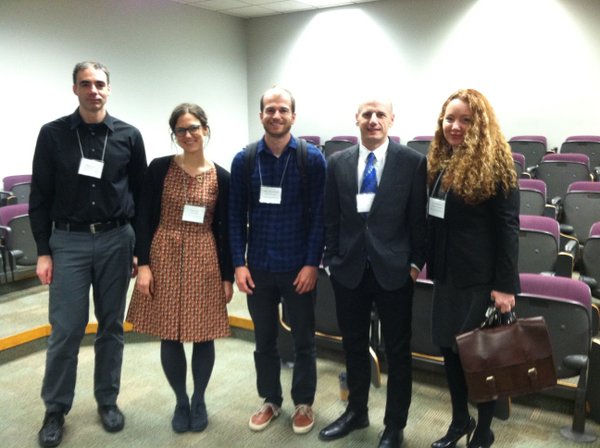 Change, and some hint of trouble, seemed to be in the air at this congress. One congress-goer posted a short piece on the lack of senior academics at Kalamazoo, while Shyama Rajendran wrote about “The Work We Still Have to Do” in terms of inclusiveness and power dynamics in medieval studies, and Gabrielle MW Boychowski posted on the controversy that erupted from the “Pseudo Society” session after several speakers used transgender slurs in attempts at humor, resulting in some people walking out of the session and the organizers issuing an apology and promise to fully vet all papers in the future. “#FemFog” shirts, referencing the Allen J. Frantzen misogyny incident from last January, were much in evidence, and Jeffrey Jerome Cohen even wrote a piece calling into question that most sacred of conference activities, the imbibing of alcohol.

Fighting off my cold, I drank much less than at previous congresses — I believe I managed one beer at the BABEL party at Bell’s Brewpub Friday night, and a beer and a couple of watered-down scotch-and-sodas at the Saturday night dance, and because of that I enjoyed feeling more awake and alert as the conference wore on. It wasn’t until the dance that I finally felt well enough to cut loose, and I found myself dancing with some old and new friends for several hours to the mostly ’90s playlist pumping into the ballroom, having real fun for the first time since my arrival, sweating and laughing, staying until the bitter end and even hanging out afterwards in the Valley dorms, eating popcorn and laughing some more with a handful of folks. Some of the conversation inevitably turned to job stuff, and I was keenly aware of those who had barely made it — or had not made it — to Kalamazoo. Someone tweeted afterwards about having to explain the lack of affiliation on a conference badge, which felt like “not having a last name,” and indeed, subtle and perhaps unintentional hierarchies were often in play. “Where are you now?” sounds like an existential question, but in practice it’s inevitably tinted with issues of status as much as genuine curiosity — not “being somewhere” is akin to a kind of academic death, or at least state of Limbo.

In some sense, this held true for me as well. The “American University of Kuwait” printed below the name on my badge prompted questions that went beyond the usual “How are you liking it at University X?” and sometimes a simple statement of incredulity: “I can’t believe you came this far for a conference!” I answered such queries in the good-natured spirit with which I hope (and trust) they were asked, genuinely eager to talk about some of my amazing students and colleagues, as well as the strangeness and wonder of living in the Middle East. In truth, of course, it is difficult for me to make it to conferences in the U.S., especially during the school year, and despite the support I receive my North American conferencing will be limited in the future. And there are some tough challenges — I was reminded of some of the issues we’ve faced while communicating with my wife Tina about a leaky bathroom back home, and stepping into the Exhibit Hall to look at the riches of the book fair was an exercise in frustration as I thought about our limited university library and the tiny collection of books I was able to bring.

Every Kalamazoo is different. It’s my favorite conference because, creature of habit that I am, I love the routine of knowing it’s there every spring, knowing my way around campus and (sort of) around the city, seeing familiar faces and catching up, submitting to the relentless rhythm of the sessions and socializing — most of all, feeling the fellowship of others who are so passionate and smart about all things medieval. Kalamazoo was the first conference I felt welcome at, and it helped make me feel certain about the academic and, I guess you could say, life path I eventually chose. Despite the changes in Kalamazoo and me, I hope to continue that fellowship well into the future.