The Part About Jeffrey Miller 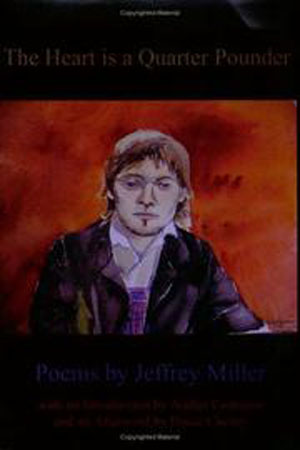 Like most people who’ve heard about Jeffrey Miller, the story of his life and his poetry has always been an open secret, shared with a few friends here and there who’d also somehow known about him. To this day — even though a book of his poems (above) has finally been brought into print (The Heart is a Quarter Pounder, available via SPD) — I continue to schlep around a loose-leaf folder of copies of Miller’s poems, passed to me many years ago by my friend Sarah Peters.

I’m not going to go into the whole “legend of Jeffrey Miller,” which always accompanies any discussion of him. Grew up in Michigan, moved to California, befriended a circle of poets including Andrei Codrescu, died young, etc. — there’s a long and excellent article about Miller here, recently forwarded by Sarah, which reminded me again to pick up his book and renew my acquaintance with these poems.

It’s the poems that hardly ever get talked about when people talk about Miller. Yet I feel I can safely say that they’ve been hugely influential to a number of poets I deeply respect: the aforementioned Sarah, her brother Tom Peters, and the late Jim Gustafson. Given that all these poets hail from Detroit, I’m tempted to say that Miller’s voice casts its shadow over the entire “Detroit scene.” But I really don’t know anything about the Detroit poetry scene beyond these poets, and I wasn’t especially involved in it even during my undergrad years at Wayne State. So I’ll just stick with Miller, and what I take from his poems.

Morning falls apart without a newspaper
so to set it straight
I bend curves out of silverware
until cotton sprouts in a spoon’s hollow
and weaves me the basic plot in the Bible.
I’m sitting in the kitchen. This place
is a cathedral of twisted utensils.
And this poem’s based on a couple swell wonders:
Will Steve Roper escape the clutches of her terror?
Who won the Pistons game?

There a few elements I see here, as in pretty much all of the poems by Miller I find most “successful” — though that’s an especially slippery word to use to describe them; they just sort of work or they don’t, for me. First, there’s a rather large dash of what I’d call a Ted Berrigan approach to the poem. A willingness, even an insistence, on following (seemingly) stray thoughts and including any and every pop culture and sports reference that comes to mind, creating a rapid-fire surrealism that propels the poem.

Knowing how painstakingly Berrigan arrived at the form that would eventually become his great Sonnets, I don’t discount the element of craftsmanship and hard work that went into these babies. Yet somehow, they feel a bit more natural to me, a bit more human than Berrigan’s poems. I don’t know if it’s because I identify more with the types of references that crop up in Miller’s poetry — Detroit teams like the Pistons, the Tigers, etc., place-names like Flint and Battle Creek — or if it’s because Miller insists on keeping things on a personal level. I haven’t read a great deal of Berrigan, but I’d venture to say that he at times seems interested in a very literary discourse (with Shakespeare, French Surrealists, contemporary poets) that Miller almost wholeheartedly rejects.

Wit is the driving force here.

I was but a mere trout hooked on a candlelight when
they came along and made me into a beautiful woman.
It was explained that the weight of one more dark
eyelash would tilt the world, Newsweek came out,
and I spent the rest of my life walking downhill into
the arms of a cop who wore blue glitter in his mustache.
Once in custody I cut my foot on the weather so you
could follow, but you called it The Painted Desert,
charged 50 cents to get in, and Mom sent snowballs in the mail.
Now they take pictures of me sitting in front of the fire
like a fucking Irish Setter. Dad’s in the background,
smoking a pipe bomb.

The above poem, one of the few I could find in which Miller takes on a clear persona, is also about as lyrical as it gets for him. More often he refuses even this, and puts his sharp wit — which really amounts to a sort of hyper-condensing of sense and impression into little nuggets of code — into self-deprecating lines that snap back on the reader like a mirror with an attitude.

I want to scream sometimes I know so much
about baseball, rock and roll
junk like that.

I know I’ll clean my apartment before I die.

Sometimes while polishing a spoon a voice says scream.
This scream is followed by a huge thump from above.
Like God’s having a heart attack

The seeming casualness of this poem, with its off-hand observations couching an unexplained, yet perfectly understandable moment of — despair? ecstasy? freakout? — reads to me like a punk version of a poem by Rilke:

Sometimes a man stands up during supper
and walks outdoors, and keeps on walking,
because of a church that stands somewhere in the east.
and his children say blessings on him as if he were dead.

And another man, who remains inside his own house,
dies there, inside the dishes and in the glasses,
so that his children have to go far out into the world
toward that same church, which he forgot.
— Rainer Maria Rilke (trans. by Robert Bly)

I love the way Miller’s poem gets at some of the same domestic horror expressed here, at the same time refusing to get too “heavy” and injecting some much-needed humor in the end, which both undercuts and emphasizes the horror. His poems make you laugh, but it’s always laughter with an edge to it, laughter that’s a bit off, as you never quite know what it is you’re laughing at or what your laughter is covering up. It’s this, finally, that I find so seductive and frustrating about Miller’s poetry. Seductive because it appears so effortless; frustrating because it’s not. These poems have to be lived. With an utter confidence in one’s self, attentions, emotions. They risk being trivial and outright “bad” at every turn — which is the biggest reason I’ve continued to admire them so much.

Read the article about Miller, buy the book if you’re so moved; maybe I’ll let you borrow my copy sometime.

This entry was posted in Literary, Small Press Reviews. Bookmark the permalink.

8 Responses to The Part About Jeffrey Miller