If you’re a poet, a person who loves poetry, or a person who simply loves old books, you’re certainly familiar with this experience:

You walk into a used bookstore. You head for the poetry section. You begin scanning the shelves, running your finger along the spines to make sure you don’t miss a slim, potentially rare and valuable small-press edition (in San Francisco I used to find Lew Welch chaps — Courses, Wobbly Rock, etc. — with some frequency). Nine times out of ten — scratch that, 99 times out of 100 — you’re disappointed to find a cheaply made book by Martin Michelwitz or some other author you’ve never heard of, on a press you’ve never heard of, which has somehow made its way into this store.

NOW… I realize this flies right in the face of my championing of scarcity, obscurity, etc., just in the past few weeks. And truth be told, I HAVE picked up, read, and even brought home books that I’ve discovered this way. I’ll have to write a post on some of those gems later on. But let’s face it: for every potential diamond in the rough, there are a dozen vanity projects that have rightfully been swallowed into obscurity, or there are “table scrap” poems by known or semi-known poets that are pushed out in cheap, crappy editions. There’s nothing more disappointing, even disheartening somehow, than wondering why someone thought it was necessary to publish Heartsongs by Louise Glück in a chap format (I made this up, but it sounds like something that might have been done, right?).

I was thinking exactly this sort of thing last evening as Tina and I wandered into The Second Reader Bookshop on Hertel Ave. Certainly, I had no intention of buying anything. But then, I came across some pretty remarkable stuff (see below). The books by Rilke are both beautifully bound German editions, which will hopefully motivate me to work on my language skills so I can actually read them properly. 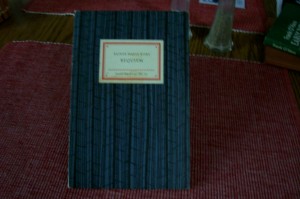 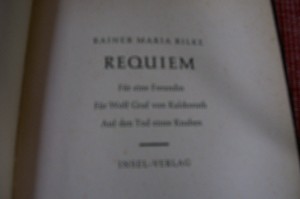 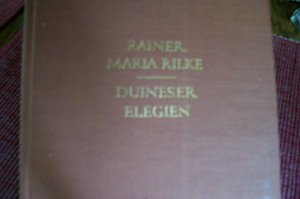 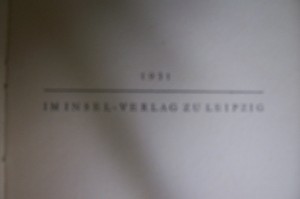 1931 edition from Insel-Verlag, Rilke's publisher through most of his life

I had to grab these. The Duino Elegies… Is there a better opening line in all of poetry?

The Frank O’Hara book was something I’d never seen before. 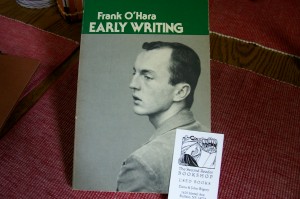 It’s filled with interesting stuff — lots of rhymed poetry from the 1940s, and some journal entries in which he’s trying to work out his aesthetic stance, typically tongue in cheek. From 10/17/48:

Shakespeare wrote with a remarkable lack of taste. Both Byron and Shelley wrote to be patronized by their inferiors. I loathe Henry Miller most, next to myself, and Marcel Proust most next to us.

This confusion! My own writing is so far in the future that it may well be a mirage. Except that the future itself is a mirage and I refuse to disbelieve in either.

Great stuff, and we had a great conversation with John Rigney, the owner, as he closed up shop on a perfect evening. We’ll definitely be back…

This entry was posted in Buffalo, Literary. Bookmark the permalink.

2 Responses to The Second Reader Bookshop