The Ballad of Vincent Giuliano

If you’ve never worked at a library, you might not know this, but people donate books all the time. Stacks, piles, bags, boxes… People who are moving or cleaning out their storage, I guess, and don’t feel like trying to sell them, but can’t bring themselves to throw them away. But the books don’t simply proceed to some central processing plant where they are put into circulation. First, they are examined by low-level staff — i.e. a “page” — who makes snap decisions about whether to send the books along, based on what kind of shape they’re in, and whether it seems like they’re worth taking up valuable library shelf space.

The page also has first dibs if he simply wants to keep the books for himself. That’s where I come in. During my time working as a page at the San Francisco Public Library, my personal library expanded by several hundred items, including not just books but a fair number of LPs — an amazing collection of musical soundtracks (Cabaret, Bye-Bye Birdie, Sweet Charity…) was once dropped off at the Noe Valley Branch, at the very moment I was working on some songs for a play I’d written… I doubt this is what the people donating those materials envisioned when they left their bundles. Yet by and large I’ve enjoyed and taken good care of my scavengings, and during my time at the SFPL I even unearthed some pretty valuable gems. 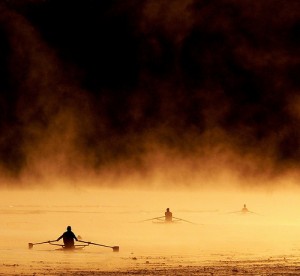 Moment, A Selection of Poems and Stories by Vincent Giuliano, is not one of them. At least not in any conventional sense. You won’t find this author on the web (no hits on Google). You will, remarkably, find two copies of the book on Amazon, one selling for the why-bother amount of $3. The book itself runs to 174pp, perfect-bound, with a non-glossy cover stock and a simple design. No publisher information, bar code, or ISBN; the copyright belongs to “The Estate of Vincent S. Giuliano.” Glancing through it that day in the library, I quickly deduced that Giulano, born just a couple years before me, had moved to San Francisco as a young man to pursue poetry, and died in mysterious circumstances at age 23, leaving behind the poems and writings I now held in my hands.

I immediately knew I couldn’t send the book along for processing. Without a “real” publisher and Library of Congress info, it was bound to be discarded, and even if it did somehow make it into circulation, it was destined to be one of those books that sits on the shelf for years, anonymous and neglected — somehow an even worse fate than immediate disposal. I kept it. Over time I read bits and pieces of the writing. All this revealed was that I had not uncovered a 2nd Keats — Giuliano had not been a genius. The writing was competent, precocious, and young.

Before getting to that, though… The far more interesting aspect of the book, to me, was the story behind it. Around this time, I had been writing a review of Kent Johnson‘s project The Miseries of Poetry: Traductions from the Greek (Skanky Possum, 2003) which would eventually appear in the Chicago Review. In that text, it’s explained that Johnson’s collaborator, Alexandra Papaditsas, has died mysteriously, perhaps owing to complications from her unusual condition, Cornuexcretis phalloides, which caused a horn to grow from her head… Like Johnson’s association with the famous Yasusada project, a tragedy underwrites and complicates the authenticity of the text, immediately setting in motion what we might call the “dead author effect.”

In short — as I argue in greater detail in my review — we want to believe in the dead author. We are predisposed to believe in him, perhaps because of stories like that of Keats. We are attracted to the idea of genius cut down young, before it’s had a chance to fully bloom. We are pulled in by the romance and the pathos, and — most importantly — we invest the writing with some added layer of meaning because of this. All of which, I argued, in Johnson’s hands becomes a radical critique of authorship and the “author function,” as well as our susceptibility to it — a much more pointed and entertaining critique, I believe, than that offered by other avant strategies.

The set-up with Giuliano’s book seems cut straight from this cloth. In the brief introduction, written by Bruce Giuliano (father? brother?), we are told that young Vincent was so passionate about poetry and life that he quickly inspired deep and loyal friendships in San Francisco — no mean feat — and, the part that gets me, his bosses and coworkers at his office job were so taken with him that, after his death, they helped select writings, design, and finance publication of the book.

That death was duly romantic and mysterious. The description of it is worth reproducing:

Perhaps it was passion that put him on the water, rowing alone, that unusually cold and windy April morning. Perhaps it was the intensity of his determination that made him oblivious to what was happening to him. Whatever it was, he never completed that morning row. Shortly after sunrise — his favorite time of day — after capsizing and struggling on, he lost consciousness, went into the water again, and drowned.

I’ve read this evocative but vague passage many times, and I’m never not moved by it. I don’t think Johnson himself could have set the scene any better. Passion… intensity… sunrise… It just grabs me and pulls me in, and I’m about as prepared as I can be to sympathize with the poetry that follows.

Unfortunately, as I mentioned above, it’s not that good.

It does show promise. Giuliano definitely felt things deeply, and was driven to write about them, and communicate the excitement he felt about the things and people around him. He did not yet have a good feeling for contrasts and subtleties, the ability to sift sensation down to the apt combination of word and sound — did not yet have “the knowledge of contrast, feeling for light and shade, all that information (primitive sense) necessary for a poem” (which is the Keats quote that I use as a motto for this blog). He had — thankfully — moved way beyond the doggerel-type stylings many young poets, myself included, attempt at an early age, to a longish, variable, free-verse line. But he had not really begun to experiment beyond this, in a way that would indicate a deep engagement with some other poet or poets, and that weird thing we call poetics, so that one might understand what the particular matter of his poetry was, or would be.

Mostly, he tended to write in a straightforward, Bukowski-like style, responding to specific moments and places. Here’s part of a poem (they’re mostly quite long):

A sanguine anger and
the frustrated love
of my lady
skip through the things I really must do
and leave my affairs in disarray.

My life now is a collection of papers
some in a file, some laying about
some
after this last attack
sill floating, doubling back
on their way to settling softly in the mud.

There was a new fruit
a sweet thing I have never seen
and there was fog rolling
boiling over the hill
tumbling across the bay
chasing the train covering over
the sky shining sunset lavender
and blue pink orange red
you hardly ever see a rainbow these days.

There’s lots to admire here. The opening is stunning, reminiscent of the bold lines of another poet who died far too young, Jeffrey Miller. Also, there’s the easy confidence of the voice, the fluid swerve between the internal and external, the unhurried use of image (in the second stanza), and most remarkable for such a young poet, the lack of strained metaphor and other poetic “effects” that even much older poets often can’t resist. The last stanza I’ve quoted shows the weakness: a tendency to over-pack the language with static present-participles (“rolling, tumbling, boiling, chasing”) and other descriptors, all of which points to a (perfectly understandable) too-muchness that results in long, rambling poems. I like to think of Giuliano going on to discover poets making experiments with voice and persona, like Pessoa, maybe, and poets working to condense their poems, like Niedecker, and really doing some interesting things with the tools he already possessed.

Then again, seduced in part by the “dead author effect,” I like to think of him exactly as I found him. Yes, he’s a flawed and not fully developed poet. But he’s also refreshingly free of coterie politics and poetic disputes, such as the one currently festering here, between Raymond McDaniels and Abe Louise Young. Or here. Or here. He’s just out there, passionate and intense about poetry, reminding me why I’m interested in this crazy little art in the first place.

This entry was posted in Literary, Small Press Reviews. Bookmark the permalink.

2 Responses to The Ballad of Vincent Giuliano