Kent Johnson Is the Author of Beowulf 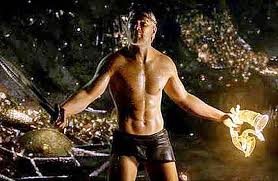 In his book Desire for Origins, Allen Frantzen includes an essay entitled “Writing the Unreadable Beowulf.” Poking into the fascinating history of the poem’s discovery and literary reception, and making use of critical theories of textuality and authorship from Said and Foucault, among others, he sheds light on the question of the poem’s authorship and highlights the ways in which every editor, not to mention every reader, in some ways contributes to that authorship. This includes, according to Frantzen, both “literal gaps,” in which the text cannot be read due to manuscript damage, and so has been filled in by philologists — and “figurative gaps,” in which the metrical or narrative arc is broken (remarkably, some of these, especially the spots where the regular meter breaks down, have been amended as well).

For these reasons, the question of authorship in Beowulf is especially perplexing. Experts can’t even agree on when the poem was written — it has been convincingly argued to be a product of the 7th century… but also the 8th, 9th, 10th, and 11th. Undoubtedly it contains elements of older folk tales, which a poet or poets reworked into a long narrative… But a narrative that, as J.R.R. Tolkien argued in his ground-breaking 1936 monograph Beowulf: The Monsters and the Critics, does not really hold together as such: “We must dismiss, of course, from mind the notion that Beowulf is a ‘narrative poem,’ that it tells a tale sequentially … the poem was not meant to advance, steadily or unsteadily.” Most remarkable is that the poem itself seems so aware, perhaps self-aware, of this notion. One only needs to sample the first 500 lines or so to find multiple digressions, a toggling between the lyric, the elegaic, and the epic. Beowulf is almost a sequence of competing texts — the “main story” of heroism and monsters, but also side episodes and prophesies, told by different characters, including a scop, or poet… even the sword-hilt that Beowulf salvages from the monsters’ den tells a story.

Frantzen writes that despite all this:

It is not surprising that, today, few dare to advocate origins for Beowulf in several poems composed by different authors; nor, as a result, is it surprising that another plausible idea — that Beowulf generates meaning through the interplay of individual textual voices generated by its external and internal readers — has likewise gone unobserved… Our obsession with the need for a pure, complete origin in Beowulf has inspired criticism to focus on the unities and achievements of the text rather than its gaps and fissures… When we see how origins of various kinds have been invented for Beowulf, by which I mean the set of traditions surrounding the poem, we can, in a sense probably more literal than he meant it, second Edward Irving’s statement that ‘Beowulf is the product of centuries’–not centuries preceding the poem, however, but, the centuries that have come after it.

I’m thinking about all this, because a colleague and I are working on a very exciting text by a modern poet that both reflects on authorship issues in Beowulf, and sheds light on the poet’s own famously ambivalent and ambiguous relationship to authorship. More on that later.

For now, it can serve as a lead-in to consider the troubling circumstances surrounding the publication of a new book by Kent Johnson, A Question Mark above the Sun: Documents on the Mystery Surrounding a Famous Poem “by” Frank O’Hara, which will soon be released by Richard Owens‘ imprint Punch Press. As explained in a post on The Chagall Position,

The book is devoted, in part, to Kent’s exploration of the intriguing hypothesis that Kenneth Koch is in fact the author of one of Frank O’Hara’s canonical poems, “A True Account of Talking to the Sun at Fire Island,” which Koch always maintained he discovered among O’Hara’s papers in 1966 after the latter’s untimely death. To me this is a valuable and interesting investigation, inviting us to widen our ideas not only about the direct participants but a host of issues such as literary mourning, authorship, “authenticity” and voice, influence, reputation, and even questions of textual editing.

This gets at the crux of the matter. For those who would ask the quite reasonable question, “Why on earth is Kent Johnson writing a book about this?” or, perhaps not bothering to ask, would shake their heads and say, “That Kent Johnson… stirring up trouble again,” I’d invite you to consider the whole history of his literary project, which has been completely and inextricably bound up with questions of translation, editing, authorship, and so on. This has not been an idle pastime for Mr. Johnson. And the “trouble” that he’s succeeded in stirring up, in projects that range from the Yasusada texts, to The Miseries of Poetry, and now to this book, is essentially the same; indeed, it’s quite similar to the problems posed to us by the Beowulf manuscript, and the poem that has come down to us through the hands of philologists, critics, and poets.

The problem is that, as detailed in the above blog post and in this one, Richard Owens has been sent a registered letter threatening legal action on behalf of the Kenneth Koch Literary Estate. The letter suggests that Johnson’s book is a “malicious hoax,” and charges that it demeans Koch’s character. It’s strongly, if vaguely, worded. How do you sue someone for a hoax, especially one that involves two dead poets?

The poet-lawyer Richard Allen, who wrote one of the above posts, doesn’t think you can. (He also questions the authenticity of the letter — a fair suspicion, perhaps, given Johnson’s history. I have every reason to believe it’s real.) The point, of course, may not be to actually win a lawsuit, but to intimidate a small and already impoverished publisher into shutting up and shutting down, with all the machinery of a giant like Knopf and its money and lawyers behind you. Owens, who also publishes the important journal Damn the Caesars, recently moved to Maine with his wife and infant daughter — still writing his dissertation for UB and struggling like the rest of us in this economy.

Despicable not just in a big guy v. little guy sense, but in the way that it betrays any sort of fealty to the questions around authorship and textuality that are central to poetry itself, questions that were asked, as Frantzen asserts, by the maker of Beowulf… that were asked certainly by Koch in his poetry, and in less direct but equally compelling ways by O’Hara… and that now are being asked by Johnson. It places the entire game of poetry wholly within the sphere of business, copyright, and literary reputation.*

*The only part of the letter that gives me pause is the charge related to Koch’s character… it’s a serious thing to call someone a liar, of course. And here I must confess that I’ve not read the entire text of Johnson’s book, which after all has not yet been published. But then again, neither has Knopf or Koch’s literary estate. But let’s assume the worst: The very worst thing that Johnson asserts is that Koch lied about finding O’Hara’s poem in a stack of the latter’s papers, and that he, Koch, wrote the poem himself. Again, in the context of literary history in general and Johnson’s project in particular, this does not seem to me to be a terribly egregious act. And as literary history and Johnson’s work suggest, we are perhaps not meant to take this charge literally, but asked to imagine its implications for all of the questions outlined above.

In Jack Spicer‘s unfinished detective novel The Tower of Babel, he depicts the character Arthur Slingbot recording a broadcast for local public radio (the character was based on Kenneth Rexroth, who did record broadcasts for a program on KPFA). Slingbot says,

The fact of the matter is — and it should have been apparent to anyone with half an ear for poetry years ago — that the Beowulf is a hoax, an enormous fake. It was mysteriously discovered in the Cottonian library in the late 18th century at just about the time Chatterton was discovering the Rowley poems and Macpherson was discovering Ossian. The anonymous gentleman who perpetrated this hoax was more ingenious and more learned than either of those two (although he had to fake a fire in the library to explain the condition of the manuscript) but anyone who bothers to examine the poetic contents of it — who is not a professor or an idiot — will recognize the pale Christianity and picturesque bedtime-story folktale that is typical of all antiquarian writing in the late 18th century.

The above passage seemed remarkable to me when I read it years ago, before I’d actually read Beowulf or any of the critical material surrounding it. Even then, I sensed that it revealed something central to Spicer’s own project, all joking aside. To discover, more recently, that Spicer himself was a serous medievalist, rigorously trained as a philologist, and worked with a scholar at Berkeley who directed him to look into the authorial issues in Beowulf first raised by Tolkien, sheds even more light on Spicer’s own ideas about translation and “dictation.” But all that, as I say, for another time.

For the time being, to say that Kent Johnson is the author of Beowulf is to say, following Borges, that we all are. It’s a thought experiment, a joke, something to get a chuckle out of as one’s reading Beowulf, or Shakespeare, or Rilke, or Frank O’Hara… but it’s one with a deadly serious punchline, and with profound implications for poetry and criticism and life. The ability to make the experiment should not be stifled.

This entry was posted in Literary. Bookmark the permalink.

6 Responses to Kent Johnson Is the Author of Beowulf