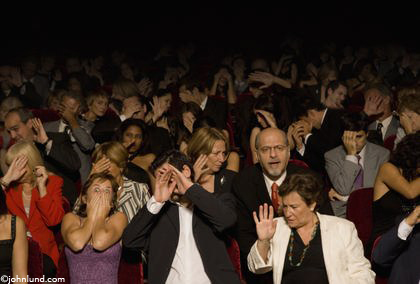 Stop! Let us out of here!

We’ve all done it. Given a reading and realized afterwards that we might have left a bad taste in the mouth of the audience, due to an unseemly gaffe or boorish behavior. Here’s a list of Seven Deadly Poetry Reading Sins you might have been guilty of at one time or another.

Preliminary Sin: Avoided reading first. You knew the moment was coming when the host would gather the poets for that awkward discussion of who would start off the evening. You were hoping to settle into the sweet spot, after your friends had arrived fashionably late and the rest of the audience had warmed up, but before attention had started wandering. So you pulled a diva move and arrived late yourself, thus dodging the conversation altogether and forcing some other soul to do the honors. Or you made a face as though someone just insulted your mother when the host approached you and asked you to take the plunge. Or you did the “I really don’t care” routine with the other poets, waiting it out till one of them finally caved and muttered, “I’ll go first.” It’s a minor sin, but the fact of the matter is that poetry readings are not rock shows; with few exceptions, there is no clear headliner and it doesn’t really matter what the order is. Besides, what comes around goes around. Take your lumps and read first from time to time. You’ll hit the sweet spot at the next reading.

1. Gone on too long. Yes, this one’s obvious, but everyone really has done it, and there are particular ways that poets go on too long that are meaningful in themselves. Of course, it sometimes happens that you simply get into a groove and you lose track and read longer than the time allotted (or maybe the host has erred by not making it clear how much time you had). It happens. But you might have exacerbated the situation—thereby revealing that your going on too long was no simple mistake but outright disrespect, even contempt, for your audience—by doing one of the following:

a. Telling the audience you’re just going to read “one or two more,” then reading for another 20 minutes. If a musician says she’s going to play a couple more songs, we know that even if there are actually three more, it will likely take 10 minutes or so. But nobody knows how long your poems are, so saying you’ll just read a few more is already somewhat meaningless, especially since we know you’re not going to be able to resist reading five or six or eight more, anyway.

b. Being so massively unprepared that you lose track of time because you have a giant stack of poems that you stop to flip through after each one. The stack of poems is already a visual reminder of how many you still have to read. Now you’re compounding the annoyance factor by rifling through them in confusion as if they’re a pile of unorganized tax documents.

c. Over-explaining your poems. This could really be its own category, but it falls under the rubric of taking too long because that is usually the result. You may even have been careful to practice timing yourself beforehand, but you forgot to take into account your penchant for blabbing. The need to explain every line in exhaustive detail is not so much disrespect for the audience as distrust of the poem. If we are attentive, and it’s worth getting, we will get it, with minimal or no interjection from you. However, no explanation in the world is going to make it a better poem.

2. Done the “polyvocal” thing. You’ve decided that you’re going to “break the space” of the standard “I speak, you listen” reading format by having audience members join in—either passing out sheets to folks at random or arranging beforehand who will be planted among the unsuspecting audience. Either way, it’s not as new or mind-blowing as you think it is. Also—especially if it hasn’t been rehearsed prior to the reading—it never goes well, because Susie doesn’t speak loudly enough and Doug misses his cue, and what you hoped would be an edgy take on the reading becomes a mess, full of awkward pauses and dropped lines.

3. Only gone to readings that you’re actually reading at. Yes, people have noticed. Noticed that it’s impossible to coax you to the monthly series at the café, even when someone is reading that you’ve expressed admiration for in the past, but the moment you are invited to do something yourself, it suddenly becomes a priority. Did you see all the empty seats at your reading? Those represent all the souls whose events you didn’t bother to show up for when you weren’t reading yourself.

4. Done the “conquering hero” routine. You’ve been invited to perform on—or weaseled your way into—the huge marathon reading that everyone’s going to be at. Nobody expects you to stay for the whole thing. But under no circumstances is it cool to show up right before your slot, with a giant group of friends, noisily fanning out through the crowd as you leaf through your poems, paying no attention whatsoever and distracting everyone else from the current reader. Of course, when you are finished, basking in the glow of your buddies’ praise, you will repeat the same obnoxious move in reverse, annoying everyone and sucking the air out of the room for the next reader.

5. Been the “local poet” at an event for out-of-towners and not bothered bringing anyone to the reading. News flash: the host did not invite you simply because you are a star, but also because you can help put butts in the seats for guest poets who aren’t as well known to the locals. Yet you decided to save your “audience capital” for the big book launch you have coming up, or perhaps you weren’t sure of the other poets and didn’t want to expose your friends to a mediocre reading. Or maybe you just didn’t care. The result was that you didn’t tell anyone—didn’t invite your friends via the event page on Facebook, didn’t send your usual e-mail blast, and arrived instead alone or with your date. Whatever the case, just know that being the one local poet comes with more responsibility than simply showing up for the gig.

6. Believed all the hype after the reading. Having just concluded a brilliant performance, the drinks are flowing and the compliments flying. One audience member exclaims that this is the best reading she’s ever been to. Another, who also publishes a small press, whispers urgently to you that he’d like to see the manuscript as soon as possible. A third promises you a headline slot on the Next Big Event. You dance home, wasted, glowing with the certainty that this is the most significant moment in American letters since Ginsberg’s “Howl” reading at the Six Gallery, and poetic fame will soon follow. However, it’s not 1955. You didn’t just give the best reading in history; the editor who solicited you is not Lawrence Ferlinghetti, and he probably has a backlog of unpublished manuscripts at home that will take years to catch up on; the headline slot (if it happens at all) will merely be another in a series of readings that fade from memory (your own, as well as the audience’s). That’s the way it is. Reading talk is just that: talk. Of course you can and should quietly follow up on these outlandish promises, but don’t expect too much.

7. Been ungrateful. Every reading you’ve ever had happened because somebody (or -bodies) put some work into it. Sure, the venue hasn’t always been packed, and occasionally you’ve felt (and may have been correct in feeling) that more could have been done to make the evening a success. But the vast majority of the time, the reading was put together in good faith because somebody wanted to hear your poetry. Your gratitude should have extended not only to that person—the host or organizer of the event—but to the audience, the proprietors of the venue, and the other poets who’ve joined you in performing their work. You should have introduced yourself to the other poets, listened politely to their readings, and when it was your turn to read, made sure to briefly thank everyone for organizing, coming out, etc. Instead, you showed up late, spent the interval waiting to read busily going through your own poems, thanked no one, and left. Rest assured that anyone in the audience who might’ve been thinking of inviting you to do something in the future took note of your behavior.

FINAL NOTE: This is meant, of course, tongue-in-cheek, but there is a grain of truth to these Sins–we’ve all done one or more of them ourselves or experienced them at one time or another. I’ve been guilty of at least four, maybe five that I can think of. If you’re reading this and you are a poet or someone who goes to poetry readings, and any other mistakes occur to you, feel free to add them in the comments section.

This entry was posted in Literary and tagged Ginsberg, Howl, mistakes, poetry, Readings. Bookmark the permalink.

3 Responses to Seven Deadly Sins at a Poetry Reading